Captured on Nintendo Switch (Handheld/Undocked)Back in February we had Retro Bowl, a simple but fantastic take on American Football, right in time.. 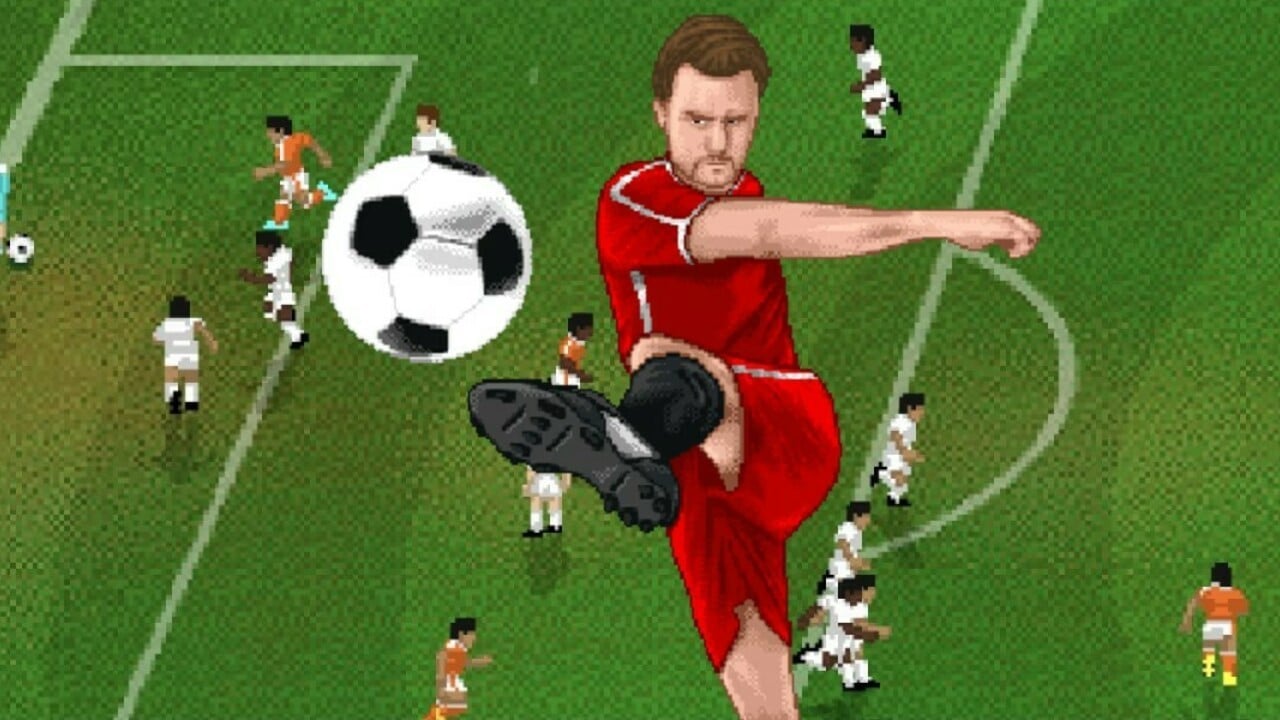 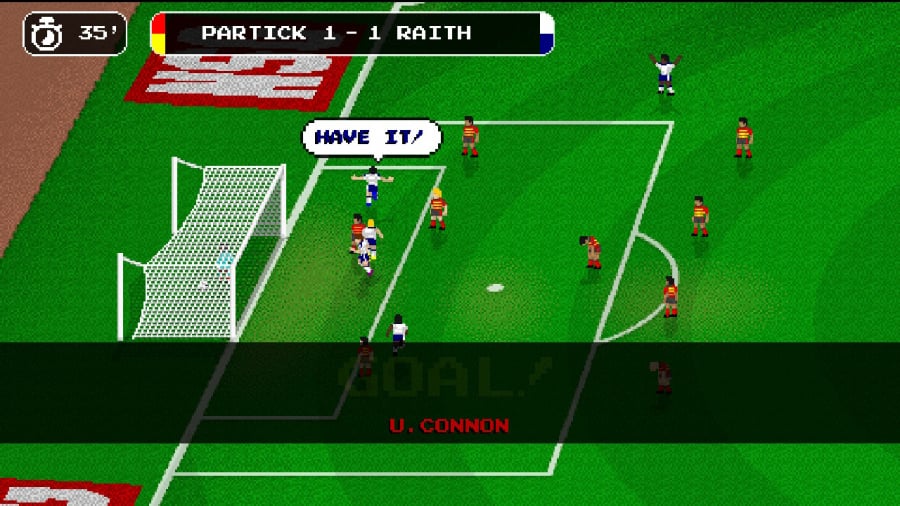 Back in February we had Retro Bowl, a simple but fantastic take on American Football, right in time for the Super Bowl. It was an accomplished port by New Star Games, which had originally enjoyed success with the release on mobile, and now we get Retro Goal in time for the football/soccer World Cup.

Once again it's a light retro-infused take on the sport that's been ported from mobile, aiming to capitalise on this year's International tournament (although many are understandably ignoring this particular tournament). Though that's just release / PR timing, as this is all about club football, incorporating similar mechanics and ideas as its NFL-inspired predecessor.

At the start you get to pick your favourite team, including recognisable club names from a surprisingly broad range of leagues. To be clear there's no official licensing here, just clever use of club names that avoid breaching trademarks. There are two tiers in the major countries, and despite naming the club you actually want to manage, you have to start lower down and work your way up; so began our campaign as fearless leader of Raith Rovers in the Scottish second tier. Glamorous it was not, but fun? Absolutely. 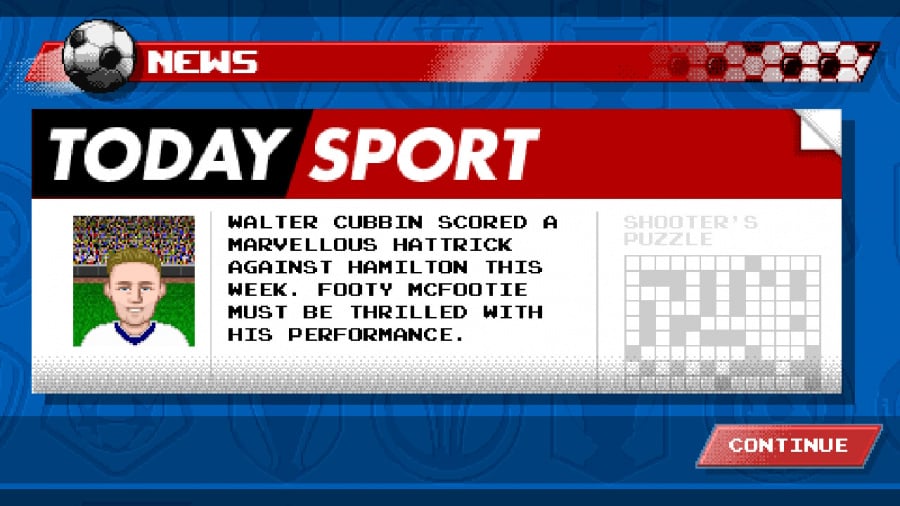 Just like its gridiron predecessor, you have limited but interesting control over the running of the club; you have modest resources and have to carefully choose how to spend your money. There's infrastructure that can bring medium-term benefits, such as expanding the stadium, or improving training and youth facilities. You can hire more or better coaches and recruit extra players, though you only truly deal with the 'star' players in the squad; unnamed journeymen fill out the line-up. You should even keep an eye on details like contract lengths, and you can get out the virtual whiteboard to choose your formation and basic strategy.

Pleasingly, the detail does matter, but can be sorted out pretty rapidly. Oversights can happen though, like when we failed to budget properly for the end of the season and could only renew one of our best player's contracts. Oops.

Aside from occasional 'events' in between games where you choose from a couple of options (like meeting the coaches or the owners), the main focus is the actual matches. You only take control of attacking moves that have a goalscoring chance, with the rest of the game simulating and occasionally being reflected in text. When opponents score, then, you find out through that text, though you can try to influence the flow of the game by tweaking your tactical approach. The main thrust is the half-dozen-or-so attacking moves you'll get per game, in which you actually take control and try to get on the scoreboard. 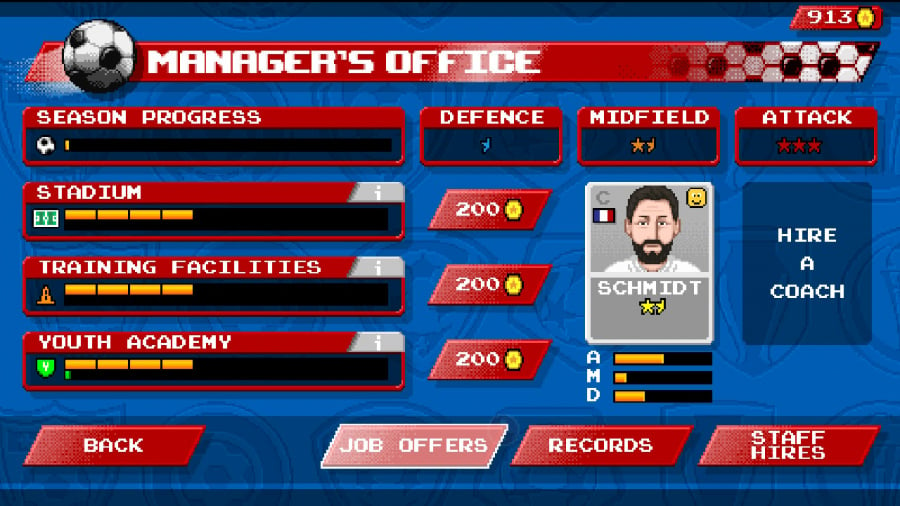 Unlike the play-by-play simplicity of Retro Bowl, there's a little more detail to the action in this one. There are different passes and shot types, even attempts to put swerve on the ball if you're feeling fancy. The core shooting feels familiar though, with a brief press and hold as you set a shot direction. As a result, it's not as intuitive as its predecessor, and can at times feel a little fiddly, but with practice it comes together and works well.

And it's still addictive, too. Your players may be little pixels with quirky goal celebrations, but the 'one more game' fever hit us once again. We didn't think we'd celebrate a late winner against Ayr United with a fist pump and overly loud exclamation, but the basic hook of the game had that effect. The pedant in us did object to the game's absence of understanding of how the Scottish league system works, but the fact that the 'Old Firm' of Rangers and Celtic are mediocre and not all-conquering bullies compensated nicely. Even though the dream job offers are (rightly) slow to come in a career, it's fun to grow your club and see your players visibly improve in the process.

Retro Goal is a distinctively light and fun take on football, coming at a budget price and having enough depth and charm to get players hooked. It has a stylish look and will raise a smile among enthusiasts; in fact, the only way it fails to match its brilliant predecessor — Retro Bowl — is in the gameplay department. The team-based complexity of football makes it hard to recreate that backyard sport feel, but it is still excellent and irreverent fun that feels at home on Switch.